This is part of our Jubilee Partnership with WindCheck Magazine and originally appeared in the February 2021 Issue.

It’s a sight to behold, thirty sailboats jockeying for a spot on the starting line during a regatta. It’s even more special when you learn the boats have a century-long history. Few fleets racing today can claim that distinction, but the H Class and the H12s as they’re known today, proudly continue the tradition Captain Nathanael Herreshoff began in 1914. 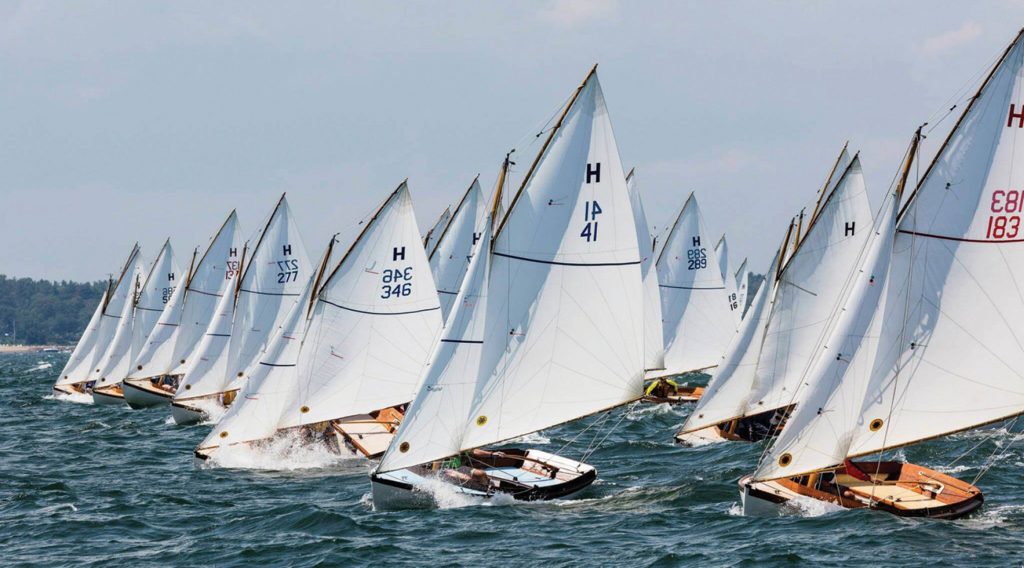 In 1914, businessman and yachtsman Robert Emmons, and a few friends, commissioned Herreshoff to design and build a boat that could be sailed by children in the challenging wind and sea conditions of Buzzards Bay in southeastern Massachusetts. Nicknamed the Buzzards Bay Boys’ Boat, the first 12 ½s were built at the Herreshoff Manufacturing Company in Bristol, Rhode Island in 1914 and began racing in Buzzards Bay in 1915. Though small in stature, H12s boast the elegant design synonymous with other Herreshoff-built craft. And while they have an overall length of just over 15 feet, it’s the twelve and a half-foot waterline that gave these keelboats their name.

Beverly Yacht Club member, Ron Wisner, now owns his family’s 85 year-old wooden 12 ½, Patricia (HMCO hull #1296, H122), and remembers sailing with other fleet members and aboard his family’s boat. “As a kid, my favorite time to sail was after a gale or hurricane passed by,” Ron recalls. “I would reef the main and ride the leftover swells out in the bay.”

Hurricane remnants aside, it’s rare to see a summer day without wind on Buzzards Bay. A stiff southwest breeze around 12-18 knots typically develops each afternoon, providing fuel for some of the best racing conditions around. And though it’s often a wet ride, the H12 can handle the chop. Veteran BYC sailor and 1956 class champion, the late Peggs Francis, was once asked if they cancelled races because of too much wind. “No way!” she quipped. “We only abandoned races if there was no wind!”

As it turns out, the boat was perfect for all ages in the family, either as a single-handed boat or with a crew of two. To celebrate the boat’s 100th anniversary, the 2014 H Class Championship dinner was held at the Emmons home where the contract for the first original six H12s was signed in 1914.

In 1973, a fiberglass reproduction of the 12 ½ was introduced. The Doughdish, created by Bill Harding, was designed as an exact replica so that it would have the same sailing performance allowing it to compete with its original wooden ancestor in the class. The name Doughdish is a derivation of the Italian word for 12, dodici. 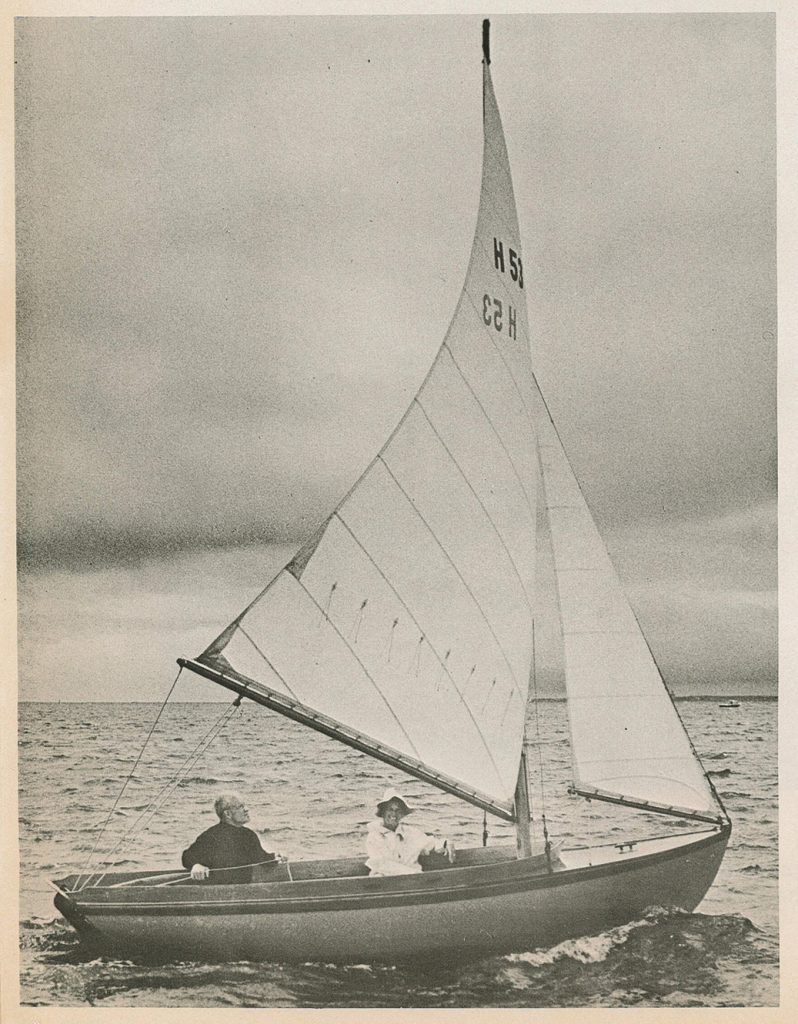 As with many of the original wooden H12s and now even with their fiberglass descendants, many boats tend to stay in families through several generations. Former Beverly Yacht Club Commodore, Bill Saltonstall, recalls that his grandfather, Robert Saltonstall, was one of the original wooden 12 ½ owners in 1915 at the BYC where he raced his boat, Junco (HMCO #750, H8). Later, Bill’s parents, Katharyn & William G. Saltonstall, purchased Vireo (HMCO #869 H4). “My mother and father kept racing Vireo for many years and the local H12 fleet grew to more than 50 boats,” says Bill. “We raced in the inner harbor with so many 12s that we sometimes were split into two divisions. My family eventually sold the original wooden Vireo and purchased one of the early fiberglass boats (Vireo H175) which we are still sailing today.”

During their years in the fleet, both of Saltonstall’s parents would win the class championship – his father in 1938 and his mother in 1981. Saltonstall’s sister, Joey Dubois, the H Class president in 1986, raced regularly in the BYC ladies’ fleet, winning the championship in 1978 and in 1991 aboard her boat, Fast Enough (H142), and was a fierce competitor for many years, until retiring from racing just a few years ago.

Saltonstall himself is a lifelong competitive sailor, but not always in an H12 where his racing career began. As a child, he participated in the club’s Midget races for skippers 12 and under and then moved up to the 110, the International Tempest, the Laser, the Shields, the J/22, and the J/30 before rejoining BYC’s H12 fleet where he’d raced as a young boy. So, what brought him back? “I moved back to the 12 because it was such a strong class, I had so many good memories of the boat, and I knew that I could maintain her myself.”

Today, “the gaff-rigged sloops of wooden construction (built by the Herreshoff Mfg. Co., the Quincy Adams Yacht Yard, and Cape Cod Shipbuilding), all built to the designs and specifications of the Herreshoff Mfg. Co., and the fiberglass version of the 12 ½, known by the trademark “Doughdish,” (first built by Edey & Duff and presently built by Doughdish, Inc., and Doughdish, LLC), are eligible for membership in the H Class Association,” notes the H Class website.

Some boats use tanbark sails, others white, and all spars are still constructed of wood. A few modern conveniences including aluminum spinnaker poles, spinnaker blocks, and digital compasses are now permitted. “The spirit of the H Class Association, based on Nathanael Herreshoff’s 1914 design, and launched in a fiberglass version in 1973, is to produce a boat equally suitable for learning to sail, daysailing, and competitive racing by people of all ages and abilities.” That effort continues today with over 200 members and an active board working to promote fleet building and maintaining the special characteristics of the boat. Presently, the Class is focused on building its next generation of sailors to carry on this century-old tradition.

Since 1925, the Beverly Yacht Club has hosted a Thursday afternoon ladies’ racing series that’s still going strong today. BYC also holds H12 racing on Tuesday evenings and Sunday afternoons, and runs special races including a moonlight race and a single-handed championship. Other clubs have similar racing schedules and all promote activities like rules seminars, rigging training, and discussions about racing tactics, along with fleet gatherings and fun races, to keep their members engaged throughout the season.

They may not be the fastest boats racing today, but these nimble little keelboats have a quiet presence and subtle speed all their own as they move through the water. Camaraderie and great competition are what keep many H Class sailors involved, plus for some, figuring out the boat’s quirks is part of the allure. “I do love to race small boats with enthusiastic crews,” says Bill Saltonstall. “The gang that sails at Beverly is fun to be with and I am more than challenged to get the most speed I can find in this pretty, old-fashioned boat with such a long tradition on Buzzards Bay.”